In this post we will cover the basics of WeakAuras2. Further posts will address the types of auras, how to create them, and the various settings.

WeakAuras is a Buff & Debuffs addon.  What that means is that it’s strengths lie in displaying information related to buffs or debuffs which a character or NPC gains or loses.  It is an extremely powerful tool.

It also allows you to easily import the settings of another player.  This means that while you might not want to create auras yourself, there is a high probability that someone else has created the aura you want and has shared it online.  Your guild mates or friends can even share their auras with you in-game by shift-clicking on the aura name.

Flexibility is WeakAuras’ best feature.  If you want to accomplish something related to status effects, you can.  You can also make it look however you want it to look by choosing the type of aura, icon, color, animation, etc.

All of these examples can be created as auras.  How this aura will display is up to the creator and which type of display they prefer.  These types will be covered in the next article.

The power of WeakAuras is that it can do anything related to notifying you through the use of graphics and/or sound.  Almost everything can be done using the interface options, while a few more advanced things might require a bit of custom code to be added.  Having a basic understanding of the aura types and how the interface works will enable you to create or edit most auras easily.

While it is very powerful, accomplishing some things might be more complicated than some players prefer.  It might be useful to check out some similar addons to consider and compare what exactly you want.

I only use the casting bars provided by my unit frames and combine them with WeakAuras, however many players prefer to have some other addons handle tracking certain abilities or compliment WeakAuras.  For example my husband uses SpellFlash to tell him what abilities to use and WeakAuras to track cooldowns and procs.

WeakAuras2 is a massively capable and popular addon, which until recently had a small amount of online documentation available.  The addon maintainer just two weeks ago published a large amount of documentation to the project’s page.

There also is an in-game guide with some brief explanations.  You can access it by clicking the Blue Question Mark on the upper right of the menu and choosing “Beginners Guide”.  The Beginner’s Guide will highlight areas of the addon with a box.  However, it seems slightly broken as the text in the guide window does not always reflect what is being highlighted.  Give it a go though and see if it helps you out.

The “New in 1.4” tutorial will also point out some features of WeakAuras. 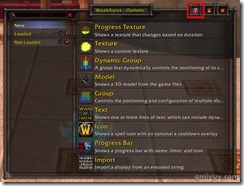 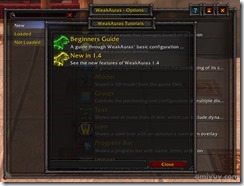 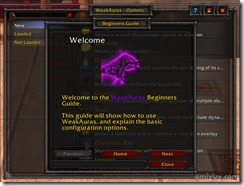 Note: The addon author calls the items created by WeakAuras “displays”.  However as many users converted from PowerAuras, the term “auras” is usually used instead.  I will be using “aura” here as well as it seems to be the most commonly understood. 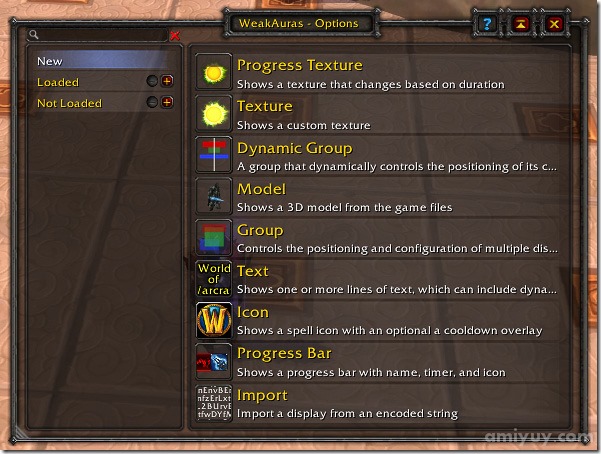 If you are switching from PowerAuras, the interface is very different from what you might be expecting.  However, don’t worry, all of the options you would expect are still available, but several will be in different locations than you might think.

If you have never used either addon before, welcome to WeakAuras2!

The basic interface has five sections:

Search looks through the titles of the auras for what you type after you press enter.  It is a simple search and will not match anything except exact results.

Search will help you navigate what can become a very full list of auras.  If I had realized it existed when I began creating my auras I would have named them all with full class names (ie. “Hunter-Active Buffs” instead of the current “H-Active Buffs”). 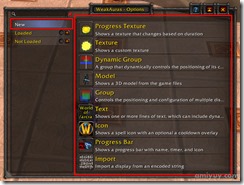 The “New” button opens the main interface.  It is here that you choose what type of aura you want to create when starting from scratch.

Each of these types will be covered below in the “Aura Types and Uses” section.

This is also where you import auras using the last option: “Import”. 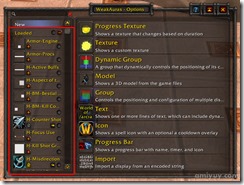 Loaded is the area on the left of the interface which displays all currently active auras for your character.  The conditions for loading are set when you create the aura. 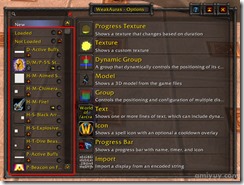 Not Loaded is the area on the left of the interface which displays all currently inactive auras for your character.  The conditions for loading are set when you create the aura.

For example: I play a Beast Mastery hunter so the only auras currently visible here are ones for other classes (D for Druid and P for Paladin) or other hunter talent specializations (H-M for Marksman and H-S for Survival). 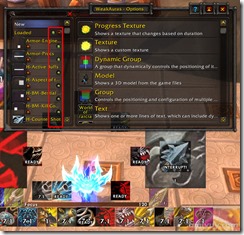 Preview is the little green/gray eyeball on the Loaded bar, Not Loaded bar, and on each aura.  When clicked it will either hide or display the aura on your screen as a preview.

That is all for the overview of what Weak Auras can do and its interface.  Over the next few weeks I will be sharing some more detailed guides delving into WeakAuras covering: Aura Settings, Aura Types and Uses, and Creating Auras.